Another bit of new old news: XCPU 1.2.2 is the new stable XCPU release.

The XCPU folks have also put together a Fedora-based LiveCD so you can easily demo and play around with XCPU in your basement’s clusters: XCPU LiveCD 1.0.

And finally XCPU has got a new website at SourceForge and a new beautiful logo with Glenda and Tux hanging from a tree: 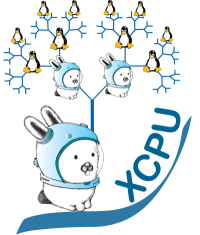